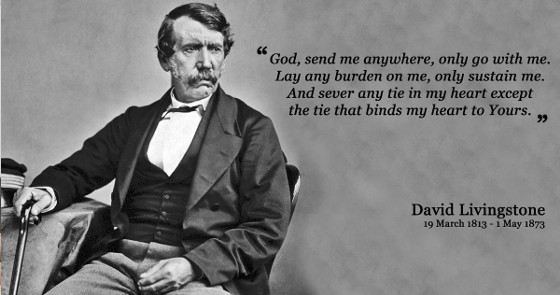 Who was David Livingstone?

David Livingstone was a 19th century, Scottish Presbyterian medical missionary, physician, abolitionist, explorer and philanthropist who was known for his "unwearied effort to evangelize the native races, to explore the undiscovered secrets, and to abolish the slave trade." [quote from his tombstone]. Some have likened him to Mother Teresa, Neil Armstrong and Abraham Lincoln all rolled into one!

We have chosen to honor his legacy because as a non-clergy person, Livingstone had a holistic view of his service in the mission of God. He wrote, "[I am] not a dumpy sort of person with a Bible under his arms, [but someone] serving Christ when shooting a buffalo for my men or taking an observation, [even if some] will consider it not sufficiently or even at all missionary." 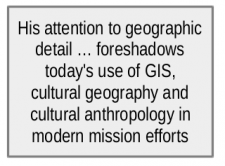 with the gospel. The African maps of his day showed vast unexplored areas with no roads, countries, landmarks or locations noted. Through his missional exploration, he redrew the map of his day to include dozens of countries in areas now known as South Africa, Rwanda, Angola and the Republic of the Congo. His attention to geographic detail as well as noting the connection of peoples to locations as a means of furthering his mission strategy foreshadows today's use of GIS technology, cultural geography and cultural anthropology in modern-day mission efforts.

Abhorring the colonial mentality of the day, Livingstone stood against forms of social injustice that he encountered. Speaking to the indigenous peoples with respect, he was driven to expose the slave trade routes and to end the slave trade through what today would be called international economic development.  As a result of his missional efforts, many other missionaries went to Central Africa where they established schools, health care and other facilities in those areas.

Livingstone also pioneered a gospel message that was communicated with respect for his audience. Rather than

trying to force the tribal chiefs to accept Christianity (as some missionaries of his day attempted to do), he proclaimed the gospel in a non-confrontational manner.  He communicated with his Christian audience through print publications such as "Missionary Travels and Researches in South Africa" (1857) and "Narrative of an Expedition to the Zambesi and Its Tributaries" (1864).  His use of visual art in journals and writings to represent geographical features and artifacts that he discovered in his travels gives evidence of his use of current media to maximize the effect of his missional communication.

The Livingstone Signature Series is the missional centerpiece of the degree programs at Missional University.  Each degree program (Associate, Bachelor completion and Master's degrees) has a set of three courses that every student takes.  These courses provide a foundational missional understanding:

What is the Mission of God in Our World and What is My Role in It?

A course that traces the theme of God's redemptive work in our world from Genesis to Revelation provides students with ways to see God at work all around them in everyday life.

How do I Share My Faith in a Dialogical, Non-Confrontational Way?

A course that teaches how to understand the worldview perspectives of people you meet through an engaging conversation that may lead to opportunities to share your Christian faith.

A course that teaches Christians how to develop a personalized spiritual development process through the study of scripture, prayer and fellowship with other Christians that leads to engaging the needs of people around them together.

The three courses below build on each other and will enable students to understand worldview and its application to sharing their faith with others conversationally. Through these courses, students will be introduced to ways to understand the viewpoints of others and develop appropriate missional approaches based upon knowing worldview perspectives.

Understanding the Mission of God in this World (3 credits)

The three courses below build on each other and will enable students to understand the redemptive narrative that spans the Scripture from Genesis to Revelation.  Through these courses, students will be introduced to the missionary nature of God, how He has been at work through human history, and ways in which God uses believers in His mission.

Growing Spiritually While Serving in the Mission of God (3 credits)

The courses below teach Christians how to develop a personalized spiritual development process through the study of scripture, prayer and fellowship with other Christians that leads to engaging the needs of people around them together.